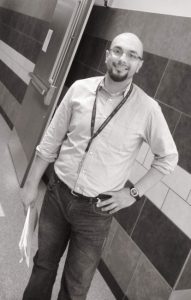 Days after Thanksgiving 2017, Josh Schwarz was given the devastating news…Cancer— Squamous Cell Carcinoma. Three weeks later, he was in an operating room for fifteen hours at St. Luke’s Hospital, as surgeons removed the malignant tumor, 1/3 of his tongue, and lymph nodes at the back of his mouth, and neck; followed by extensive reconstruction. After an extremely tough week in surgical ICU, he was able to go home, just in time for Christmas, to prepare for the next phase of recovery. With speech therapy and proactive measures planned, including radiation and chemotherapy – to prevent the cancer from returning. Josh kept his unwavering positive outlook on life; spending time with his family, friends, co-workers and guiding students to be the best version of themselves at the junior high school, where he worked as an Assistant Principal. After some time, Josh found his new normal.

Fast forward to January 2019: Josh met with his doctors for a routine post-Cancer checkup. Unfortunately, the results weren’t what we hoped for. The Squamous Cell Carcinoma was back, with a vengeance.

Joshua Paul Schwarz passed away on October 18, 2019. Josh was, above all else, a great dad, husband, brother and son. He was an avid musician, and a passionate teacher and school administrator. He loved the outdoors, traveling, and sports (especially the Astros, Rockets, Dynamo and Texans). He especially loved spending time with his wife, family and friends. His greatest accomplishments were his son Dylan, his family, and the legacy that he left with students, faculty and administration at Lanier and Queens Intermediate.
Josh is survived by his loving wife Erika Schwarz, his son Dylan Schwarz, step daughters Kelly Navarro and Samantha Martinez, his mother Delia Schwarz, his father and step mother Don and Brigett Schwarz, his sister and her husband Kristin and Chris Banks, his brother Jeremy Schwarz, his step brother Jessie Cerda, his step sister Shannon Cerda, his niece Katelyn Banks, his nephews Gabriel and Bradley Banks, his Nana Betty Schwarz, and numerous cousins, friends and colleagues.
Josh was a really good friend to all. He found the positive in any situation and was always there if anybody needed him. He always had a smile, or a kind word, for everyone he met. He will be greatly missed by all. The family will receive friends on Friday, October 25, 2019 from 5-9PM at Forest Park Lawndale Funeral Home. Funeral service will be Saturday, October 26, 2019 at 11:00 AM in the Grand Chapel of Forest Park Lawndale Funeral Home. Interment will follow at Forest Park Lawndale Cemetery.

To see photos of Josh and read about him, go to:

By submitting a class note, you agree: