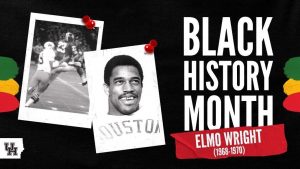 HOUSTON – Elmo Wright’s first appearances on the gridiron had little to do with football.

As a member of the school band in his adolescence, the soon-to-be College Football Hall of Famer, NCAA record holder and 1970 first-round draft pick stepped out onto the field at halftime to entertain fans. At that time, Wright was more interested in time with the saxophone and the piano.

When the seventh grade rolled around, time spent alongside the sport sparked some curiosity.

“After band rehearsal, the football guys would still be out there hitting,” Wright recalled. “When the band director would leave some of us would go over and join the football guys. I found out right away that what I liked to do best was catch the ball.”

By the time Elmo reached 10th grade, his older brother L.C., a fullback on the team, finally convinced him to give the game a shot.

“I wasn’t very good at first, in fact, I was one of the least-talented reserves,” Wright said. “I was so far down that it was unbelievable. But the coach had a lot of faith in me and he kept my interest in the game.”

The two-time all-state performer became a highly touted recruit, drawing interest from programs in-state and out of state. According to an interview with Brazosport’s The Facts, Wright stopped counting scholarship offers after 50 and vowed he was the luckiest man in the world, choosing to continue his education and playing career with head coach Bill Yeoman at the University of Houston.

“I had always cared a lot about my education, and I wanted to go somewhere near home that had a good math and engineering program as well as a good football team,” Wright said. “UH had to have both, as far as I am concerned.” 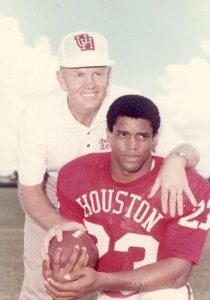 Houston’s program continued to ascend prior to Wright’s arrival in the fall of 1967. The Cougars finished the ’66 season with an 8-2 mark and No. 17 ranking in the final coaches’ poll while leading the NCAA in total offense with 437.2 yards per game.

Wright had a strong freshman season but his progressed slowed in the spring due to a broken finger on his right hand and what he called at the time, a lack of mental toughness.

“I just wasn’t tough enough mentally, so I went back home this past summer and got myself in great shape and I got my confidence back up a little,” Wright said at the time. “When I came back this fall, I was ready, but I was never certain I could start until just before the beginning of the Texas game when coach told me to go in there.”

In his first game with the varsity squad, Wright caught three passes for 162 yards and two scores against Tulane. He continued to pile on that season, hauling in seven catches for 249 yards and four touchdowns against Idaho as well as eight receptions for 244 yards against Cincinnati.

As a sophomore, he caught 43 passes for 1,198 yards and 11 touchdowns. Houston led the NCAA in total offense during that 1968 season (562.0 yards), helped in part by Wright who set an NCAA record with eight 50-plus yard touchdown receptions.

His junior season, he was named to the All-America second team, hauling in 63 receptions for 1,275 yards (third nationally) and 14 touchdowns (second nationally). His 20.2 yards per catch in 1969 broke the NCAA mark (set by Utah State’s Mike O’Shea) by a full yard.

“He does everything exceptionally well,” offensive line coach Bill Willingham told the Houston Post heading into Wright’s senior season. “He could probably play for the pros right now. We’ve got him for one more year, though, and we’re going to take advantage of his presence. We may never see another one like him.”

“Because of his speed and ability to score from anywhere on the field, we never see a normal defense,” Yeoman once told the Houston Post. “He sets up our running game because no one man can ever cover him. As soon as you put another man or two on him, it opens up a hole somewhere else.” 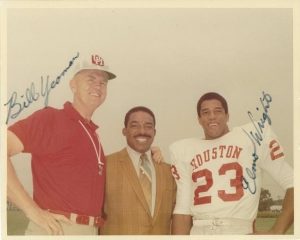 Wright capped his career as Houston’s all-time receptions leader (153) and leader in receiving yards (3,347) during a time when freshmen were not eligible to play varsity. His 34 touchdown catches and 21.9 career average per catch set NCAA Division I records. He received his engineering and technology degree from Houston in 1971.

For his efforts, Wright became the first player from Houston selected in the first round of the NFL Draft, signing with the Kansas City Chiefs. He won the Mack Lee Award as the team’s top rookie in 1971. Five years later, the University of Houston elected Wright to its Hall of Honor.

“I can’t imagine a better receiver than Elmo,” Yeoman once said. “He can do so much after he catches the ball, but he helps our running game, too. He’s really improved as a downhill blocker. There’s no doubt he’s one of the game’s finest all-around players.”

Unequivocally known as the “founder of the Touchdown Dance,” breaking out high-stepping endzone celebrations, Wright was among 17 players and two coaches selected to the 2020 induction class for the College Football Hall of Fame. He joins his former coach, Yeoman, along with Andre Ware and Wilson Whitley as the fourth Cougar to receive the illustrious honor.

Now retired, Wright earned an MBA after his football career and worked for more than 25 years for Harris County in Houston. His performances on the field and support of his alma mater, including serving as a mentor for students in the University of Houston’s C.T. Bauer College of Business, won’t soon be forgotten by Cougar faithful.

“Elmo Wright creates his own excitement,” Mickey Herskowitz wrote in the Houston Post on Nov. 20, 1968. “Remember the name. Someday he might be a big star in pro football, endorsing saxophones on the side.”

By submitting a class note, you agree: